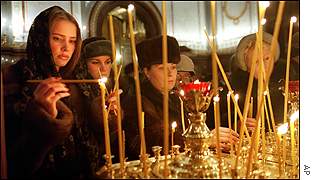 In Serbia, Christmas Eve and Christmas Day are celebrated everywhere as the most joyful feasts of the year. Next to the Serbian Slava, the family's Saint's Day, these feasts have deep national roots. Christams sees the yearly re-birth of ancient Serbian traditions - yule logs badnjak are brought indoors, straw is scattered on the floor in memory of the stable, a special Christams loaf is baked, called Cesnica, Serbs fast until breakfast on Christmas morning, eating special seasonable dishes. The gusle, a one stringed instrument peculiar to Serbia, accompanies the singing of Carols. Many toasts are drunk as part of the celbration.

During the last 50 years, because of the commie rule, Christmas has not been an official holiday, but it has nevertheless survived as the most popular festival in the country. Some of the customs are survivals from pre-Christian time - a succession of songs, poems and dances is followed by an unvarying litany of toasts and prayers for health, happiness, peace and progress for the household and for a fruitful year for the farm animals, for the crops and vineyeards, and even for the bees...

My pages in Serbian Cyrillic